Have you ever slept in a ancient Mayan City? In the middle of the jungle? Do you know anyone who has already done it? So listen to this story because it is UNREAL!

In our days in Guatemala we, as everybody else there, went to visit Tikal. This promised to be amazing for several different reasons: Tikal is a ruin of a ancient Mayan City lost in Petén’s jungle;  is one of the largest archaeological sites and probably the biggest and most important Kingdom of pre-Colombian Mayan civilization; it has more than 4000 different, mostly well conserved, structures and a lot is still undiscovered!; it is 3000 years old and its inhabited for more than 1000 years!!; much more than half of the city is yet to be excavated, and its still consumed by the jungle!!

We wanted to do it different than most of the people: Tikal’s park, outside of the ruins, has 3 hotels and a camping ground, so we decided to camp there, as well as our Australian travel couple Mark and Nikki, since we had our tent and the night was just 50 Quetzales a person! This promised to be a great experience since we would be in the middle of the jungle, and we would have the opportunity so listen and fell the jungle falling asleep with the sunset and waking up with the sunrise!

Our plan was simple: we had to get there after 3 p.m. because only then the guards allow us to buy the next day ticket so that we don’t need to spend money in two tickets. The last bus from Flores to Tikal leaves at 1 p.m., so we get there at 2 p.m. (one hour later). 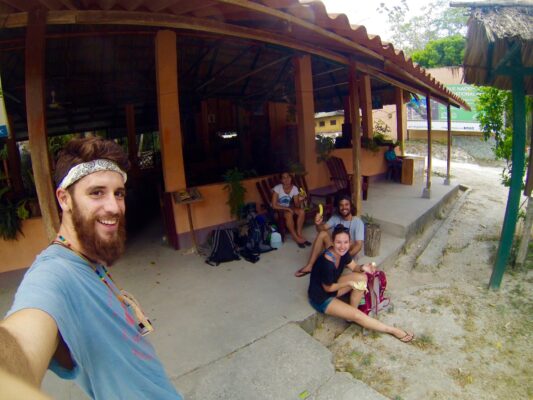 After waiting for one hour we bought our next days tickets and we took a ride with a hippie couple from the US from the entrance of the park to the camping ground. Along the way the guy told us that we is originally from Guatemala, but is family had to leave during Civil War and, when he was a kid, it was possible to pay a little more to be able to sleep INSIDE the city! I had read this too, in some blogs and in lonely planet. Can you imagine? Being able to sleep there… wow!

Another positive point off getting to the city after 3 p.m., as I told you before, is that you can be there to see the magical colors off the sunset submerse the city temples and the jungle! With this in mind we went to leave our stuff in the camping ground and we meet a nice old small mayan guy that was responsible for the maintenance of the area. He was so fluffy and nice that I thought: “Huuuum… should I try?!”. So I started talking in my best Spanish “This is so beautiful and clean” and it has, I has being real ” with the jungle around and everything, but… I can’t even imagine how it must be inside the city, with the stars and the animals, in the night…”. It was then that I almost DIED with a heart attack when he told me: “You know, we don’t do this anymore, its a absolute secret, but maybe today we can do it for you… if you want, I can talk with a guard, and he can let you enter the city after the sun goes down…” WHHAAAT?? Is this real? I was almost crying!!! Better, we only had to pay more 50 Quetzales :O We agreed to meet again at 9 p.m. so that the guard could take us inside the city!!

Without really knowing if it was going to happen or not, where inside the city we where going to sleep, a little bit anxious, stressed and maybe afraid, we went for the a walk though the ruins to buy some time and to see the famous sunset in Temple IV. 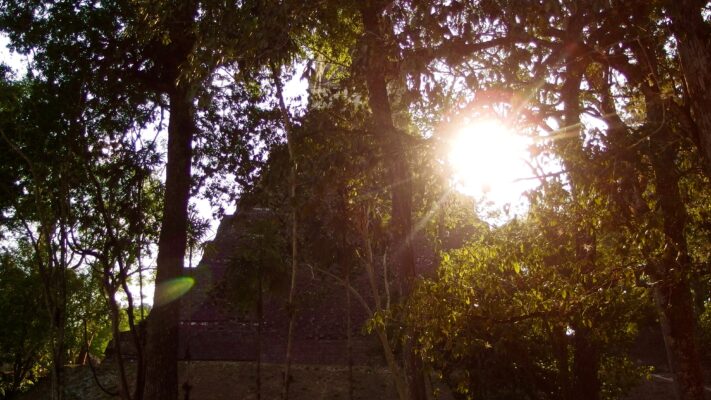 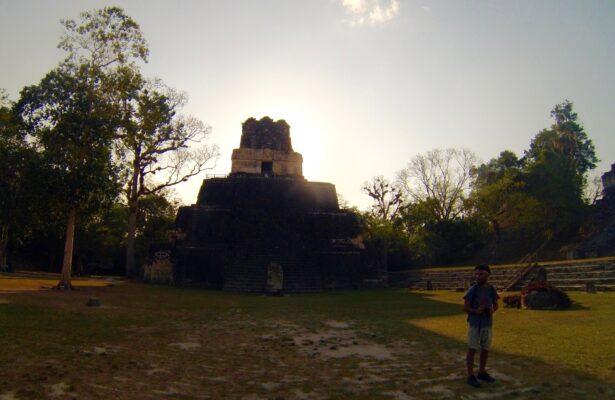 Entering the city for the first time is amazing, is almost impossible to describe the sensation of walking through the jungle while temples and buildings start to pop up on our vision, almost as if they are part of the Nature as a tree is. The magical feeling of visiting a city so old, where so many things that we still don’t understand happened, where the view on life and on the universe was so different but so evolved! And, most of all, imagining “Will we really sleep here?! But where?!”

The night sky in the jungle is almost impossible to describe, the stars shine so bright that it seems like we are looking to the ceiling of our bedroom and not at something that is so far away from us! At 9 p.m. the guard was there and so do we. He took us to the entrance of the city of Tikal and told us “You can choose where you want to stay… you can stay in the main plaza, on the top of Temple II of the main plaza, in the Bat Palace”. We decided to go to Temple II, to se the moon rise, and we end up sleeping there, only with our sleeping bags and the most amazing sky we have ever seen! 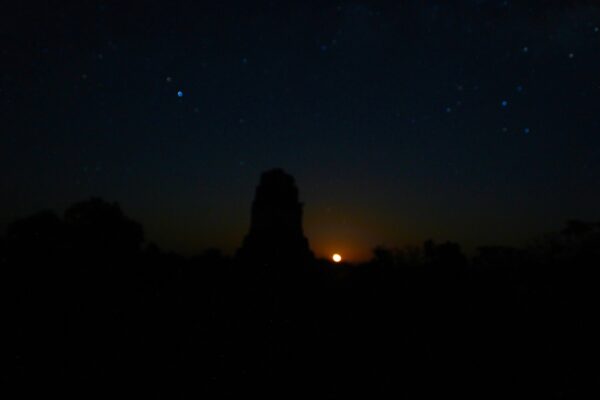 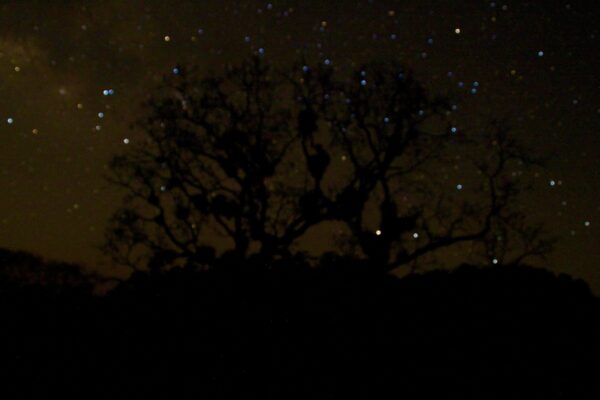 The feeling of having the opportunity of experience something so unique was the only thing we could think about:

“How many people throughout history have had this opportunity??” 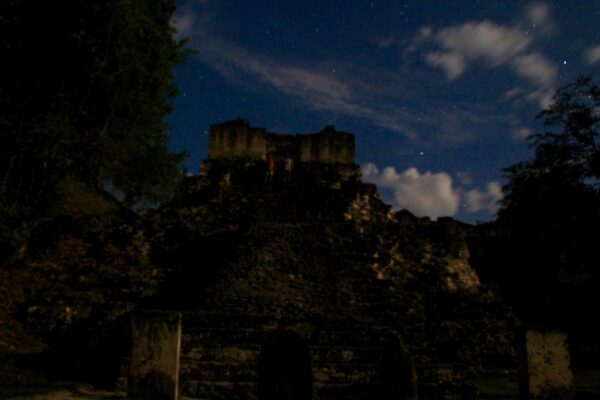 Exploring the other structures @Mark Picture In the other day we had to wake up at 4 a.m. to go, disguised as tourist (that paid 200 Quetzales just for this), see the sunrise on top of Temple IV! 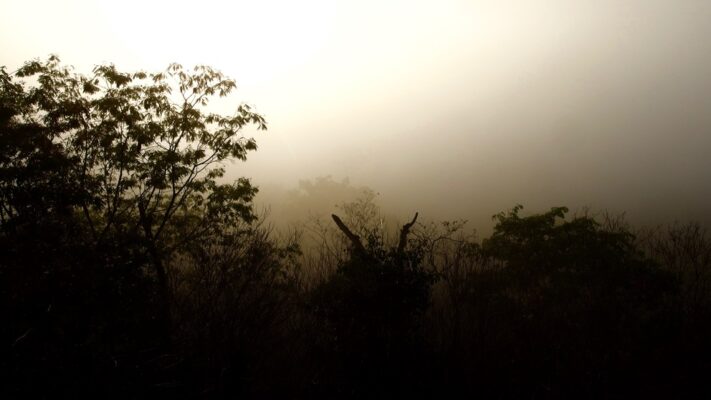 Because it was still really early (close to 6 a.m.) we explored the rest of the city just by ourselves 🙂 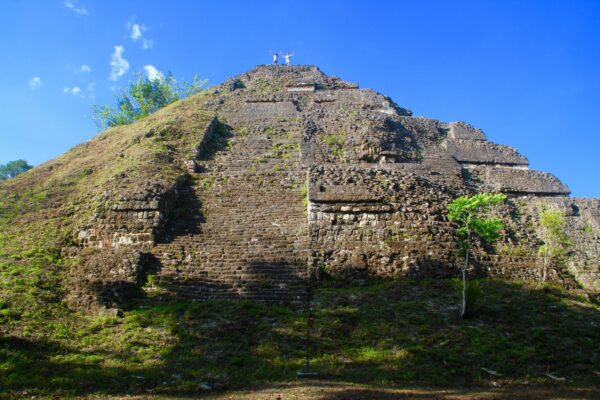 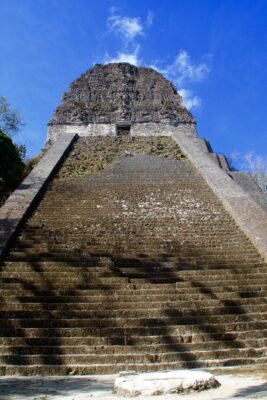 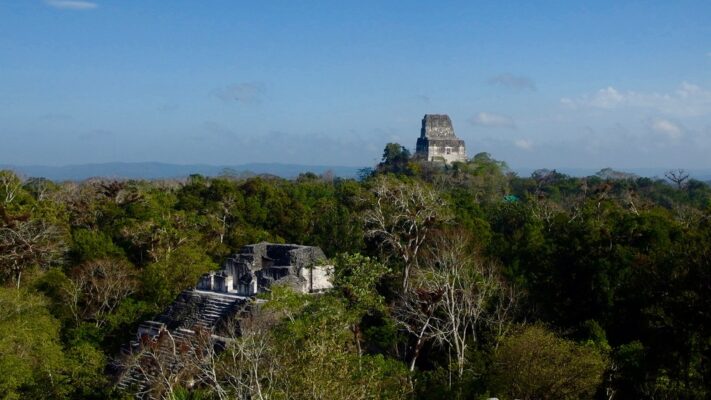 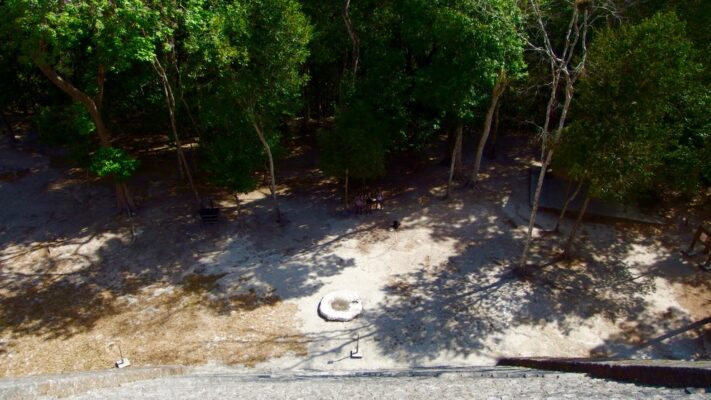 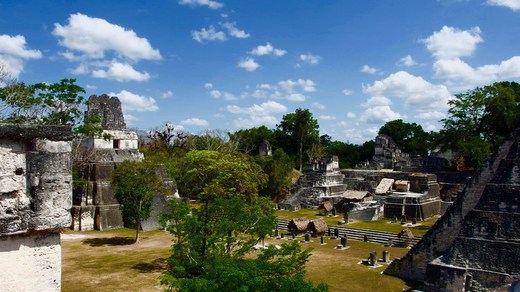 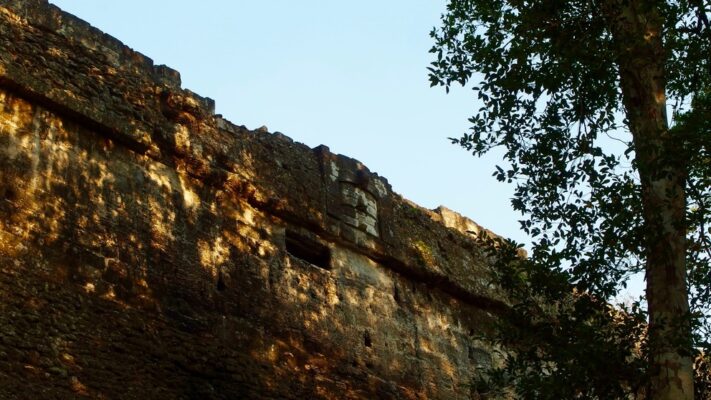